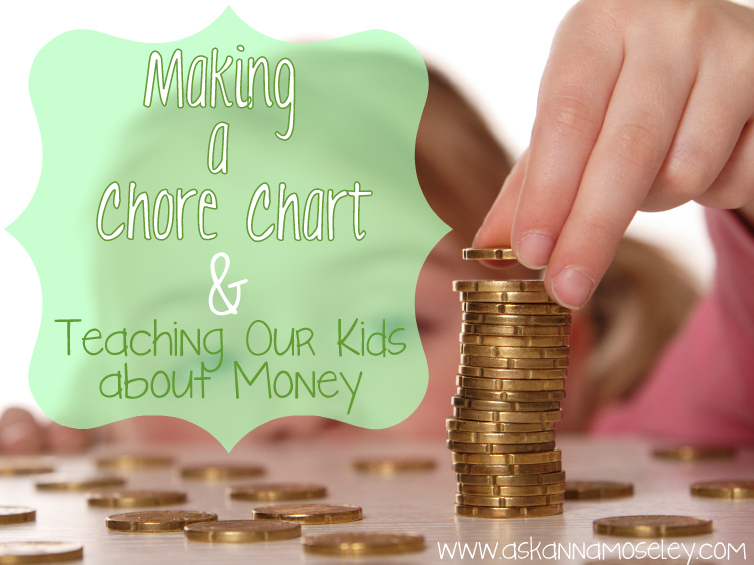 A few years ago, Matt and I took Dave Ramsey’s Financial Peace class.  I can’t even tell you how much the course changed our lives and the way we think about our money!  I could go on and on but that’s not what today’s post is about. 🙂  One of the things he mentioned in the course is that we are responsible for teaching kids about money.  Not only are we supposed to teach them about life, love and the world, but we are responsible for teaching them how to be wise with their money from an early age.  My husband is a Senior Vice President at a local bank so we’ve always tried to be smart with our money but I hadn’t even thought about the fact that I was responsible for teaching my daughter about her finances!

Now that my daughter is 3 I’ve been wanting to make a “chore” chart for her.  I remembered from Financial Peace that Dave Ramsey talked about “hiring” your kids for “jobs” rather than just giving them an allowance.  Here’s what he says about allowances, “Do not give them an allowance. After all, what are you making an allowance for? You don’t want to have the kind of kids who think money grows on trees, do you? Don’t set them up for frustration and unrealistic expectations. And don’t miss out on the teachable moments that come when you give them a commission instead of an allowance.” (source)  Instead he says to “start paying them a commission for chores they do around the house.”  I love this idea!  So with that in mind I set out to make Malea a “chore” chart.

First I had to decide what jobs I wanted to “hire” her for, and what I felt like were things that should be her responsibility.  I had a few things in mind but to get some more ideas I posted the question on my Facebook page. 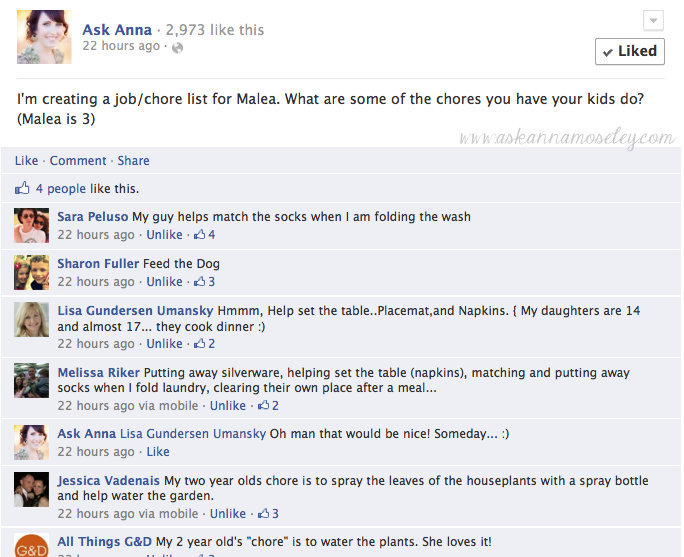 Many of the comments confirmed the ideas I already had but a few of them were great, new ideas!  I think my favorite one was from Tonya Gill, she said, “clean the doorknobs…sounds silly but really helps during cold and flu season.”  Genius!  I never would have thought of that!

Taking the ideas from my readers and the list in my mind here is the list of jobs I created for Malea:

* Cleaning up her toys

* Cleaning up her dishes after meals

The next step was deciding how much I wanted to pay her for each of these jobs.  I’m sure she won’t be earning her full potential wages, because after all she’s 3 and I know she’s not going to want to do all these things, however she is a very smart girl and a logical thinker so I know once she figures out the strategy that she’ll be earning her full wages.  Both of these things were important for me to consider when deciding how much I wanted to pay her because I want it to be enough for each job, so she’s excited about getting the money, but I also don’t want to break my bank once she starts earning her full wage!  I decided the jobs I want completed the most I would make worth more and the ones I didn’t care about as much would be worth less.

For example, if all she does each day is pick up her toys without fussing, then I would be happy, so I made this job worth $0.50 per day.  I would also really like her light turned off whenever she leaves the room so I made that worth $0.15 per day.  Other jobs, like sorting the laundry, she will only get paid for weekly.

My husband and I are also huge believers in teaching Malea how to make choices (Love & Logic) so she will quickly learn that if she doesn’t want to do her job that I would be happy to do it for her but then she will have to pay me.  I would be more than happy to make a little money on the side if she doesn’t feel like doing her job. 🙂

The next step in the process was creating a Job Chart.  I looked online and found lots of great chore charts but none of them were exactly what I was looking for so I ended up making my own using My Memories Suite. 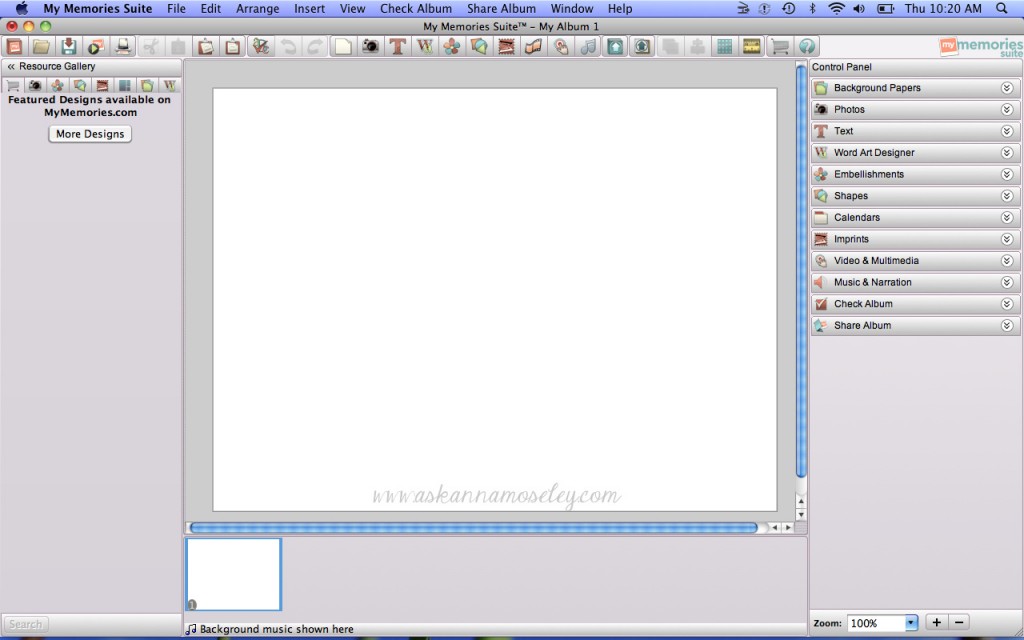 I had fun creating all the different elements of the job chart, and I kind of wanted to make one for myself!  I think I would have loved something like this when I was a kid! 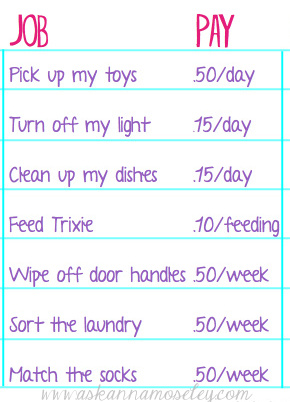 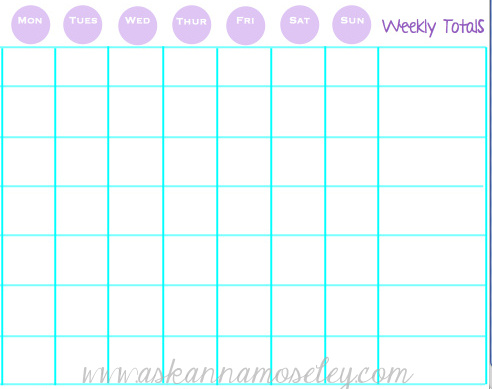 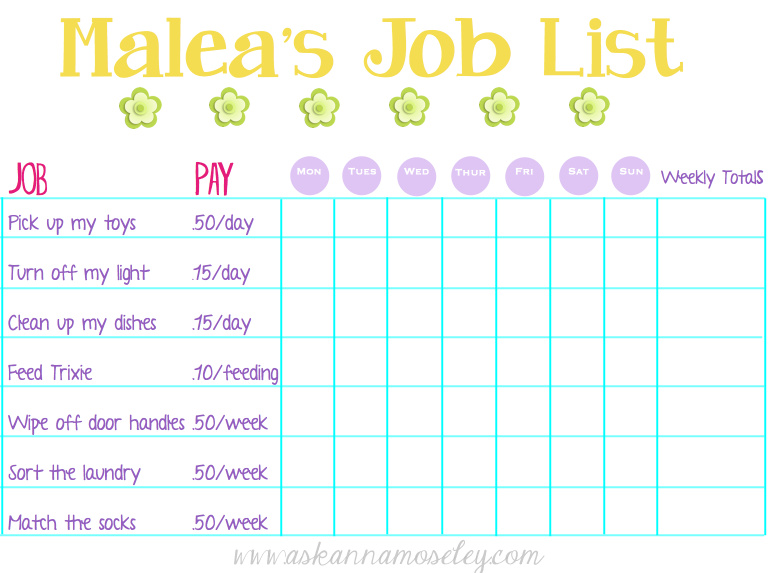 Once I was finished with the chart I printed it out and because she has already started to read and write I wanted to make the chart accessible and interactive for her.  I ended up buying an inexpensive frame and then hanging the chart near hear bedroom, right at her level.  This way at the end of every day she can check off the jobs that she completed and I can pay her {or myself depending on how the day goes}.

I also think it’s so important to teach her how to be wise with her money so I am going to set up 3 different jars for her to keep her money in: Tithing, Savings and Spending.

Have you started teaching your kids about money, working, etc?  I’m so curious to hear if any of you have your chores set up this way for your kids.  Do you do allowances for your kids?  Let’s start a conversation, I’m so interested in hearing what you all do! 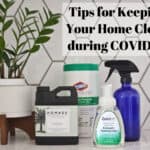 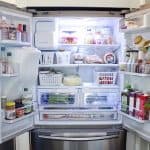