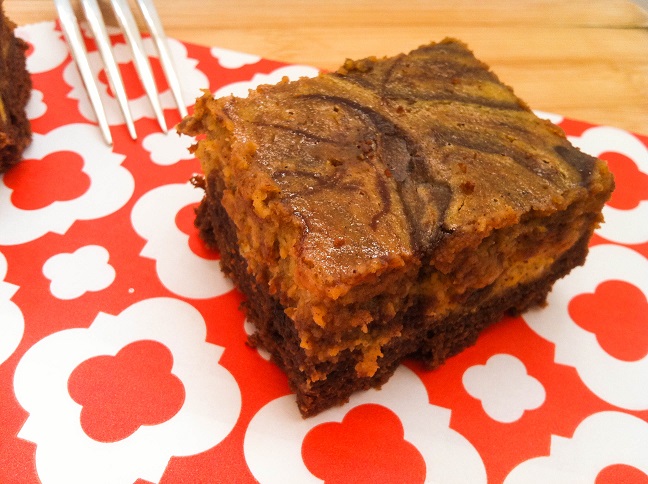 I’m Andrea from Cooking with a Wallflower. This month I’m soo excited to share with you one of my favorite dessert recipes, Pumpkin Cheesecake Swirled Brownies.

I’ve been busy trying to figure out my Thanksgiving menu. Is it too early to? I certainly don’t think so. It takes forever to plan out meals and make a list of all the ingredients that I might need. I want to make sure that I have everything beforehand so that I don’t have to run out the day of to find that one ingredient I have to have. And with stores closing early so that the employees can head home for their own Thanksgiving dinner, I really don’t want risk not having everything. Or fighting through those super long lines.

One of the items on my menu this year has to be these Pumpkin Cheesecake Swirled Brownies. 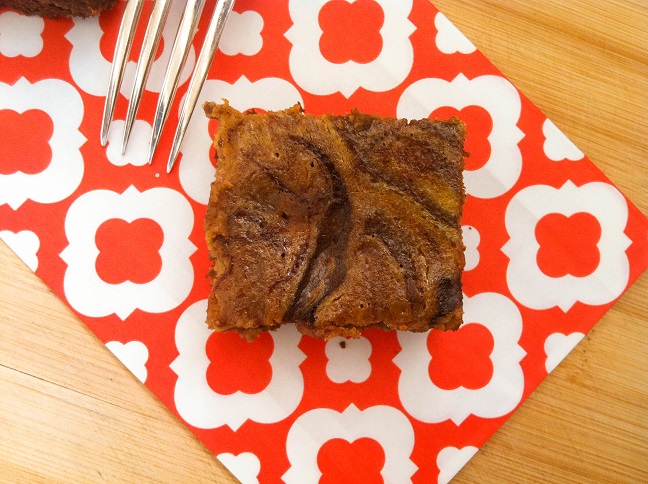 A combination of two popular desserts, brownies and cheesecake, this decadent little dessert will please your guests’ taste buds during Thanksgiving. A rich chocolatey brownie layer on the bottom with a creamy pumpkin-y layer of cheesecake on top. How can you pass up such a mouthwatering combo?

It’s super easy to make too. 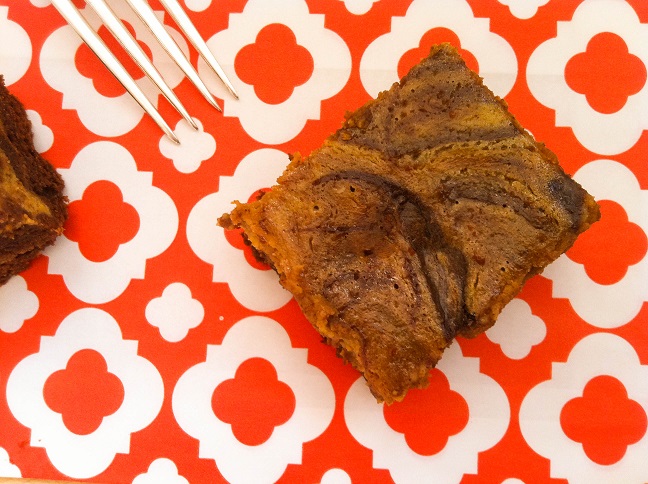 Preheat the oven to 350oF. Lightly grease a 9×9 inch baking pan with nonstick cooking oil or vegetable oil. You want to make sure to do this so that the brownies don’t stick to the pan.

In a medium sized microwave safe bowl, add 4oz semi sweet chocolate and vegetable oil. I used the Baker’s brand since they’re easier to melt. Microwave the chocolate for about 30 seconds, mix the chocolate, heat for another 30 seconds, and then stir again. Repeat this process of heating and stirring until all the chocolate has melted. 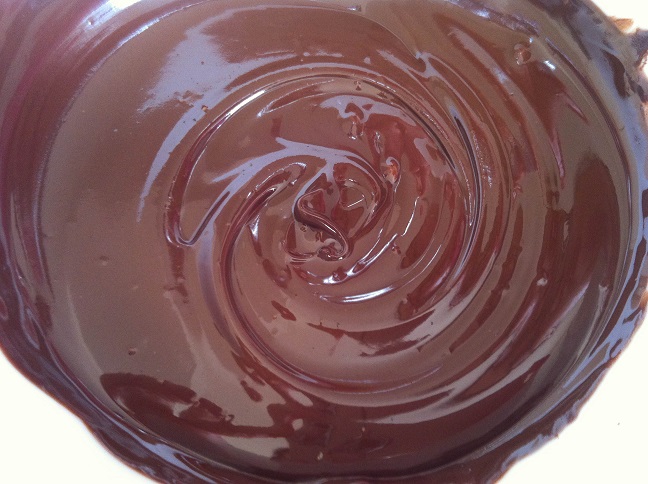 In a large bowl, beat the eggs and the sugar until they are evenly combined and appear fluffy. Mix in the vanilla extract, then pour in the melted chocolate. Use a spatula to stir until the chocolate is evenly combined. Add in the flour, and mix until the flour is incorporated. Pour the brownie mix into the baking pan and set aside for now.

Add the softened cream cheese and sugar to a large bowl, and beat them until they are combined and appear smooth. Next, add the beaten egg, pumpkin puree, and pumpkin pie spice. Mix all the ingredients until they are well combined. Pour the cream cheese mixture over the brownie, making sure to cover the entire surface.

Use a fork to create the pumpkin cheesecake swirls by lightly moving the fork in a circle. 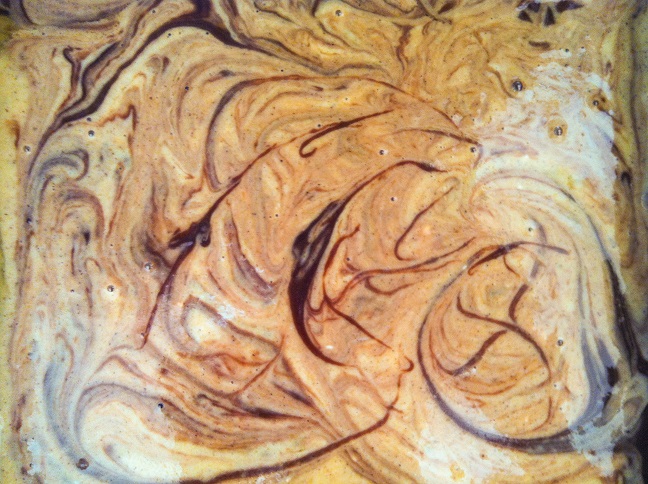 Bake the pumpkin cheesecake swirled brownies for about 20-25 minutes at 350F. The brownies are ready when the toothpick test comes out with moist crumbs still clinging.

Allow the brownies to cool for about an hour before slicing them into nine squares. Brownies are less crumbly and much fudgier after they have cooled in the refrigerator. 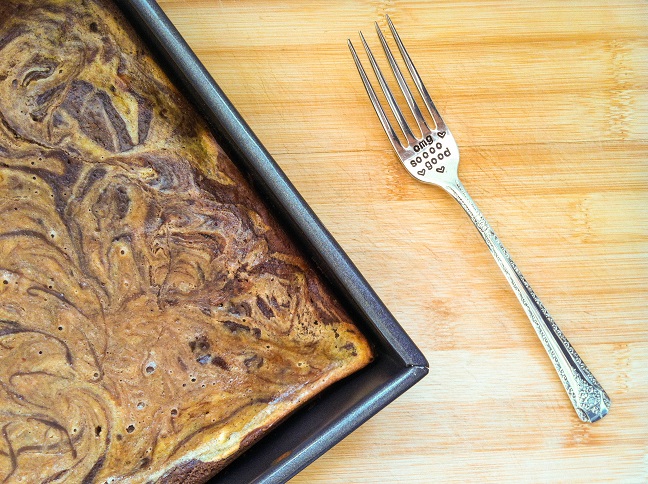 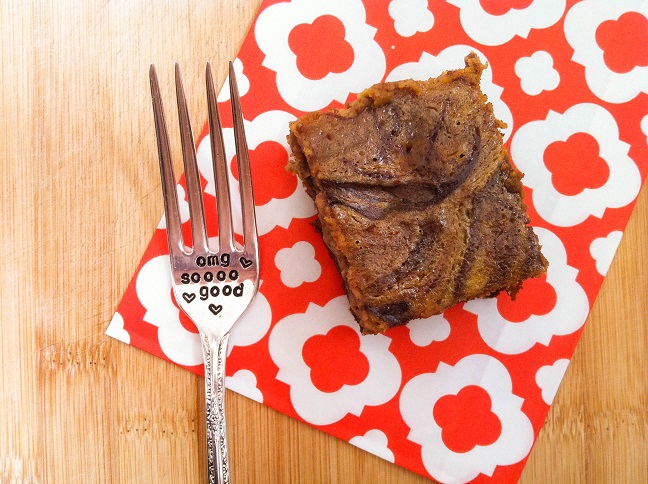 Cooking with a Wallflower

Andrea is a registered dental hygienist and a food blogger at Cooking with a Wallflower. To relieve her stress, she likes to focus on cooking, writing, and crafting. See more of her recipes and DIY projects on her blog. 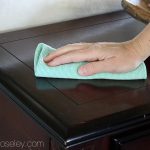 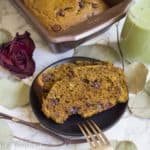