Okay my title might be slightly misleading because obviously at some point you will run out of hand soap, but with this trick it will be a LONG TIME before you do. 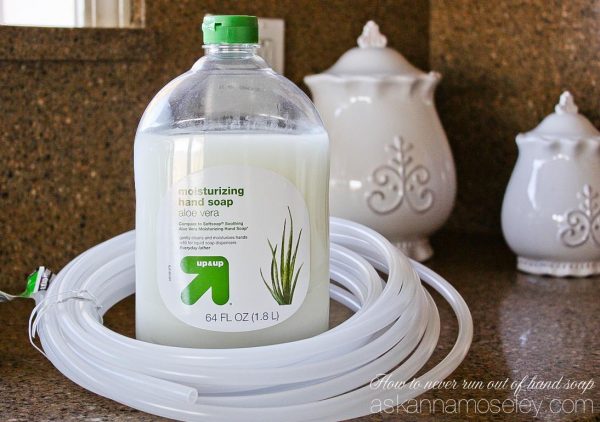 A few months back I was refilling the soap dispenser that came with our kitchen faucet, you know, the kind that goes under the counter. Anyways I was pouring the hand soap into the plastic dispenser and I was almost at then end of one of these huge refill containers when I thought to myself, “what’s going on, it should be full by now!” At that point I stopped pouring the refill soap, opened the cupboards to look under the sink, only to realize that it wasn’t filling up because it was broken, and now I had an entire container of refill soap all over my cupboard!

The plastic container had somehow been severed at the top and was completely unrepairable. So my hand soap spout sat empty for months, until one day I was asking my contractor friend where I could get a new one, and he gave me this genius idea.

So what you will need to never run out of hand soap (or at least not run out for a very very very long time) is a large refill soap container,some plastic tubing and electrical tape.

Remove the straw from the underside of the pump, take it into the hardware store and look for this Lead-free Polyethylene tubing (it’s in the plumbing section). Make sure to match it perfectly to the straw. It might even be a good idea to take the actual pump in so you can find the tubing that fits inside it best. 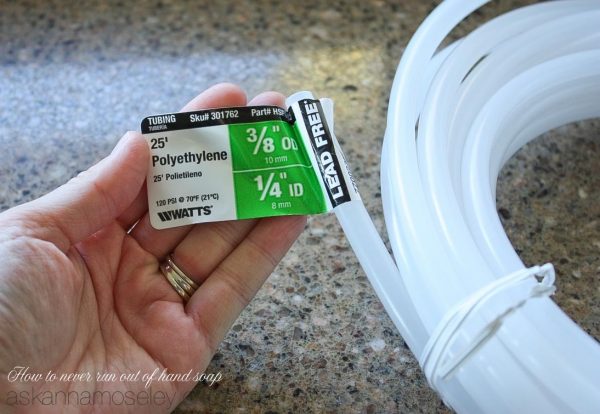 When you get home use a drill bit, the same size as the tubing, to drill a hole in the top of the refill soap container. 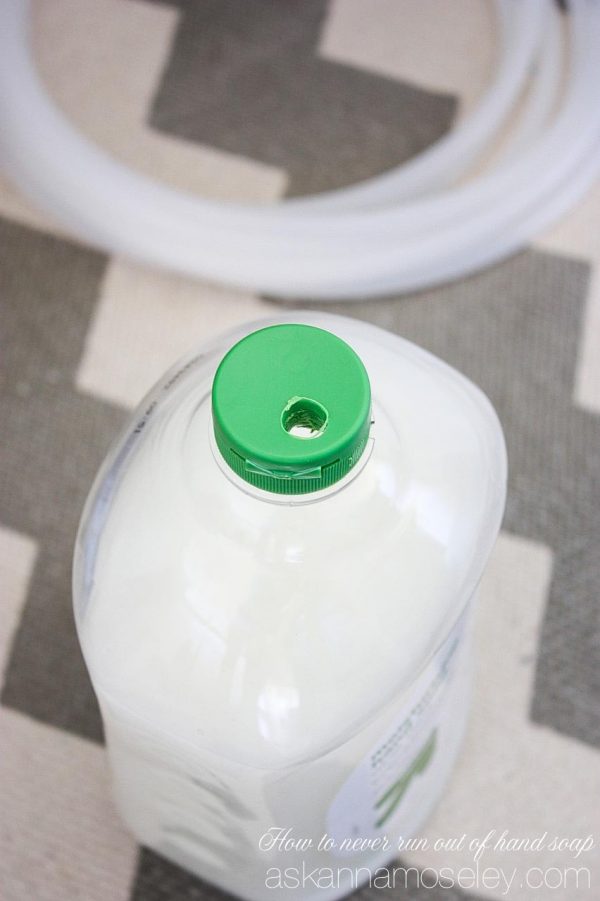 Next drop the tubing down the soap dispenser hole to measure how much you will need. 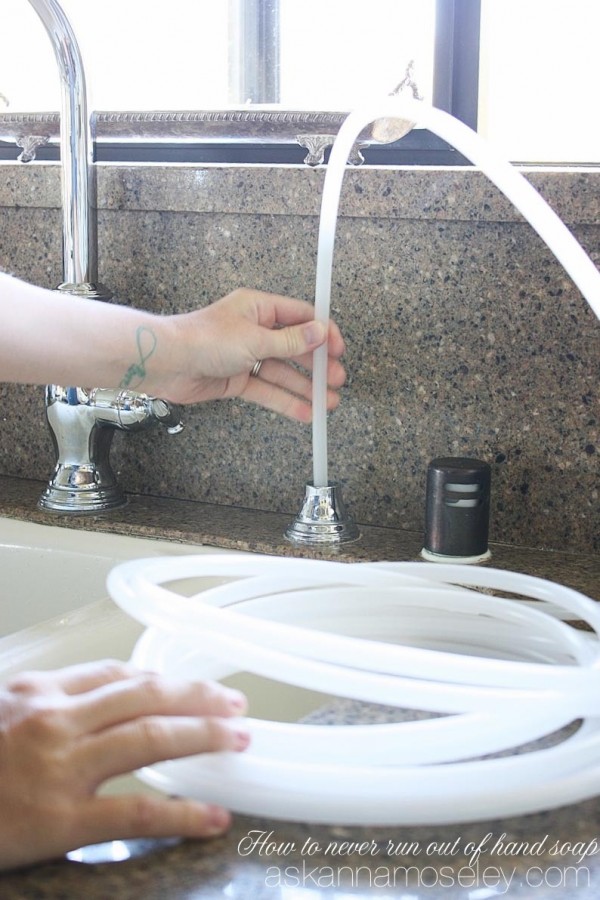 Once you’ve cut the right amount put the tubing inside the pump and drop the pump back into the whole. 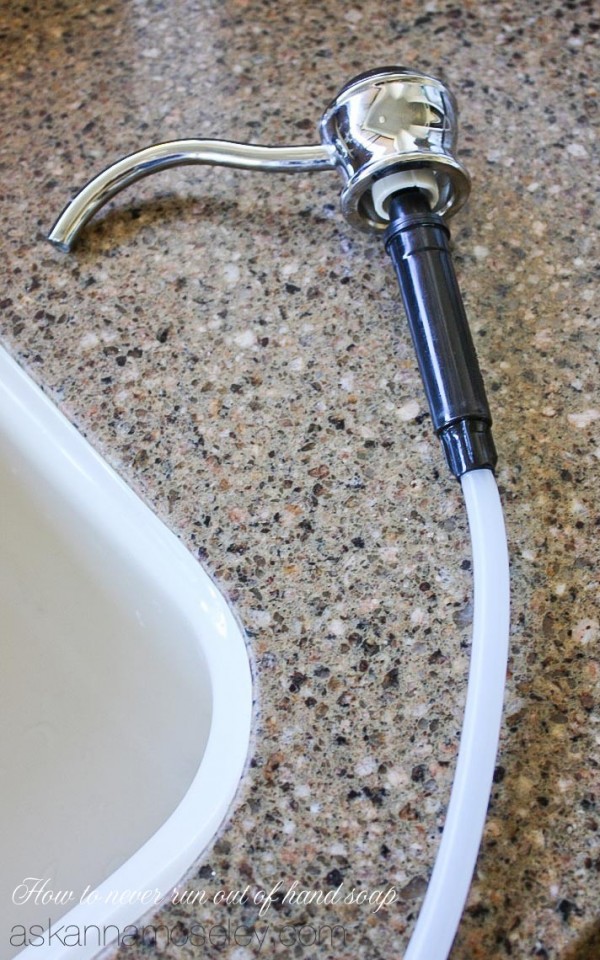 Before you can use the soap dispenser you need to make sure it’s an air tight fit. This is a 2 person job, you will need one person to hold the pump and the tube, while the other person wraps it with the tape. We used electrical tape because it’s a self sealing tape that doesn’t allow any air through the seams. Start by wrapping the seam and then wrap up and down about 2 inches, to make sure you have a really air tight seal. 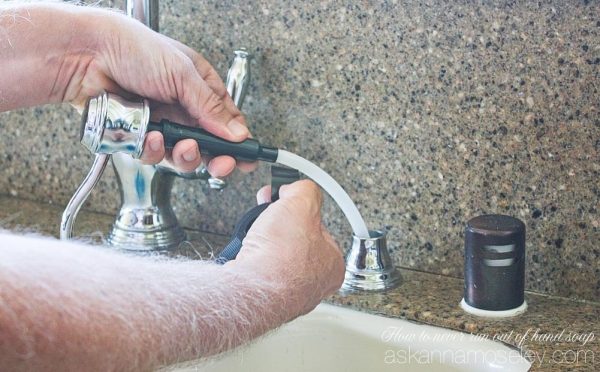 Underneath the cabinet place the other end of the tube into the refill soap container. 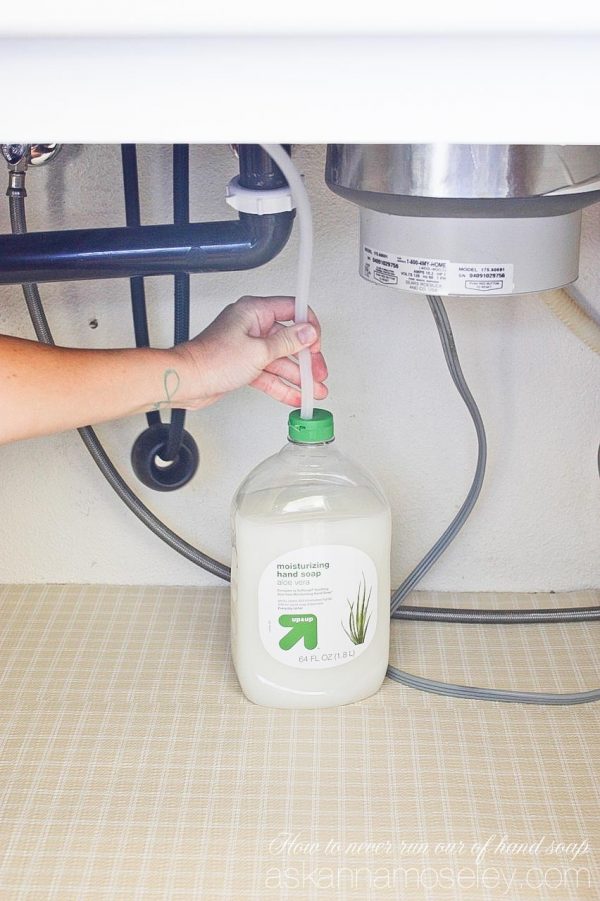 I ended up placing mine on top of a basket, to make it so the soap didn’t have to travel as far, but leaving it on the ground is totally fine too. 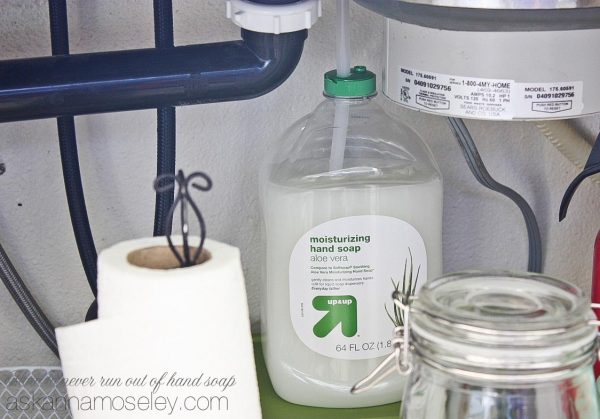 To get the soap up the tubing for the first time it takes a couple minutes of pumping but once it gets there you’ll have hand soap that will last you for months! 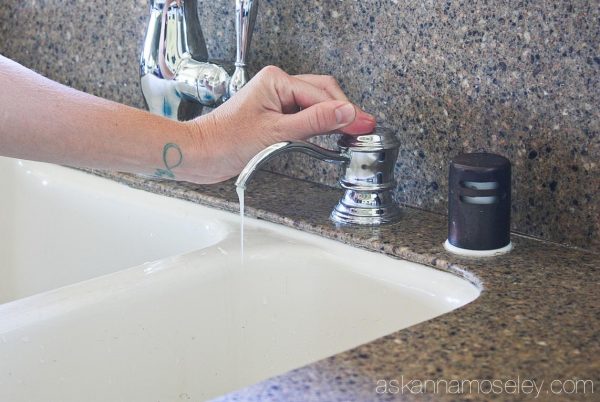 Isn’t that the best idea!? I personally hate refilling the soap dispenser all the time so I love that I’ll never have to do it again (at least in the kitchen)! 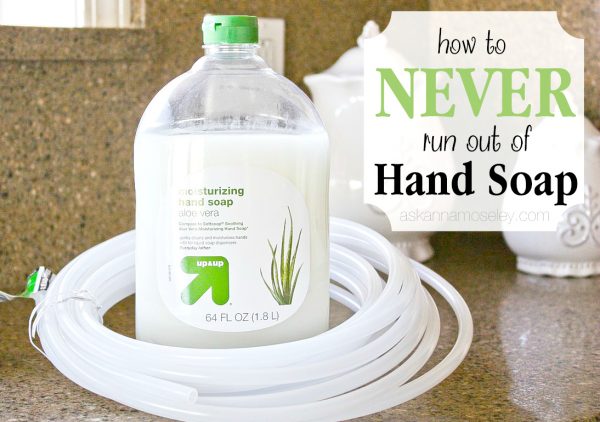 « “Give Thanks” Wood Burned Plaque
Easy How to: Classic Caramel Apples » 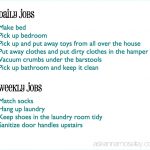 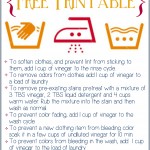