When I got the email from Cutting Edge Stencils, that they wanted to do a giveaway on my blog, I think I screamed.  I love their products and I couldn’t wait to receive mine and try it out!  I think the hardest part was making the decision on which one I wanted to review!  After a long decision process I finally decided on the Georgian Ceiling Medallion. 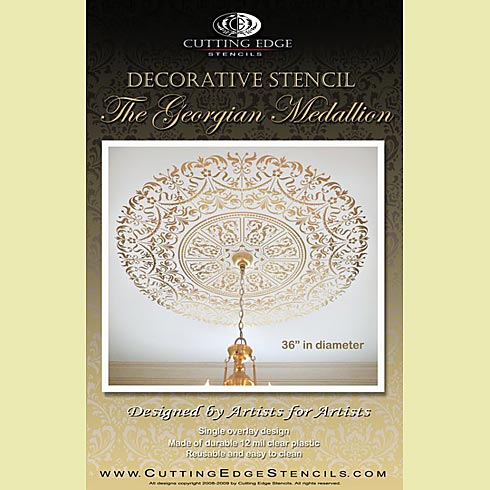 When I received it in the mail I immediately unpacked it and hung it up to flatten it.  After a few days of hanging up in my closet it was flat enough for me to get started stenciling.  I had a couple ideas for how I wanted to use Georgian Ceiling Medallion but I decided to start with the most traditional way, stenciling around the chandelier in our dining room.

Here’s what I used:
Metallic paint from Sherwin Williams {I bought it months ago and was dying to use it}
Painters tape
Ultra smooth foam roller
The stencil 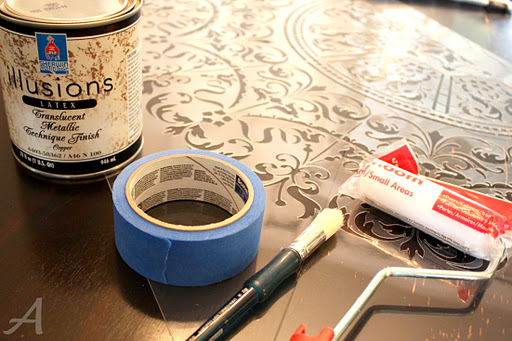 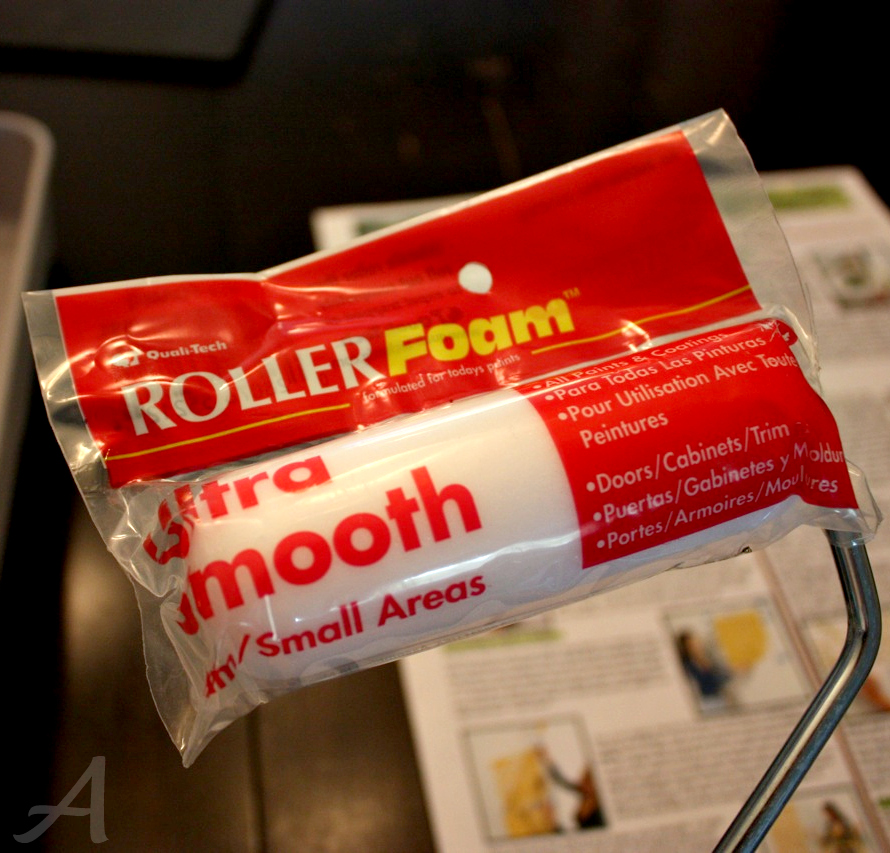 Make sure to use an Ultra Smooth foam roller so that you don’t get any leakage.

My husband and I started by taping the stencil to the ceiling, which proved to be much more difficult than originally thought.  This is definitely a two person job because one person has to hold the stencil while the other tapes.  Gravity was definitely working against us. :/ 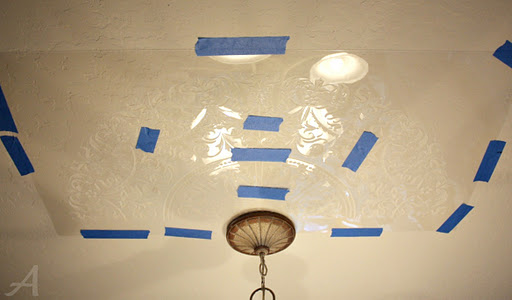 Because of all the wiring that was hanging down {that’s what you get with an old house} the stencil didn’t want to stay flush with the ceiling so I used a little extra tape to keep it in place.  In this picture you can see the gap between the two.  I was really frustrated that I couldn’t get it to stay on the ceiling but in the end it ended up not even mattering. 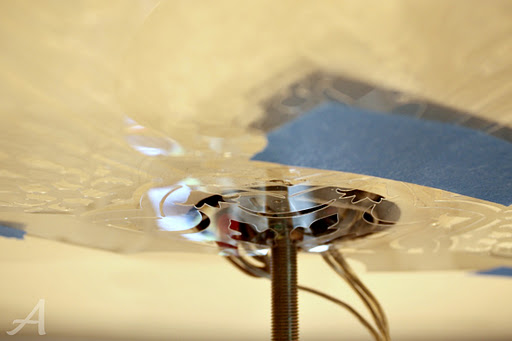 Time to paint… At this point I might have squealed I was so excited!
Isn’t the paint beautiful!? 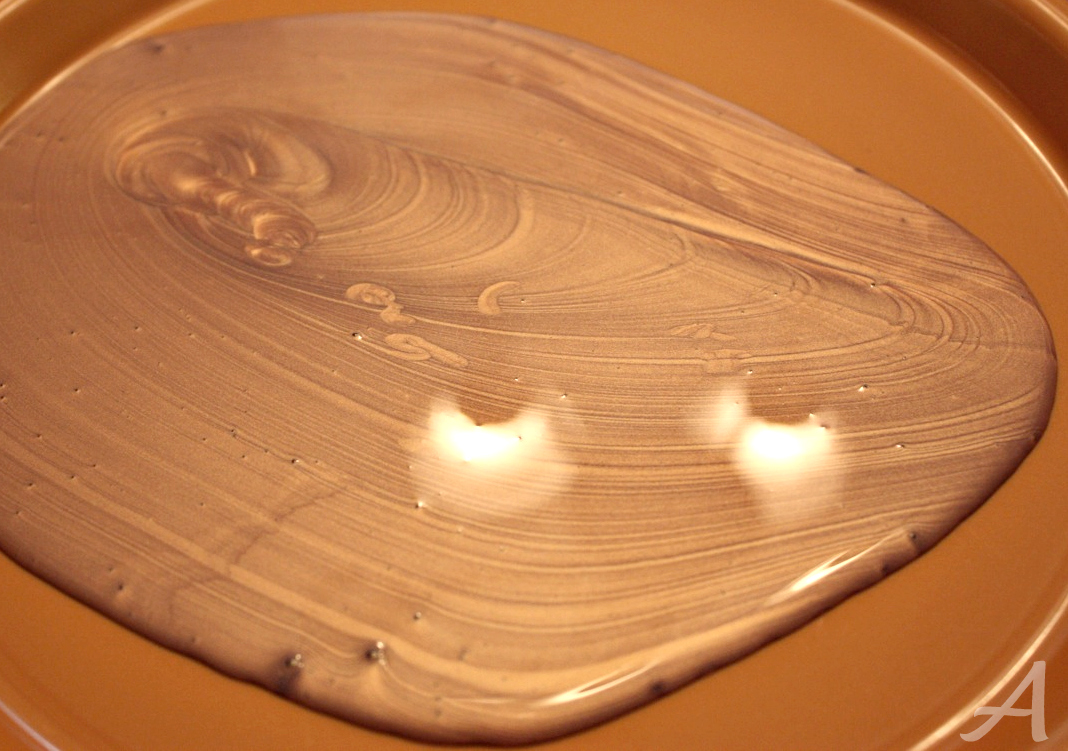 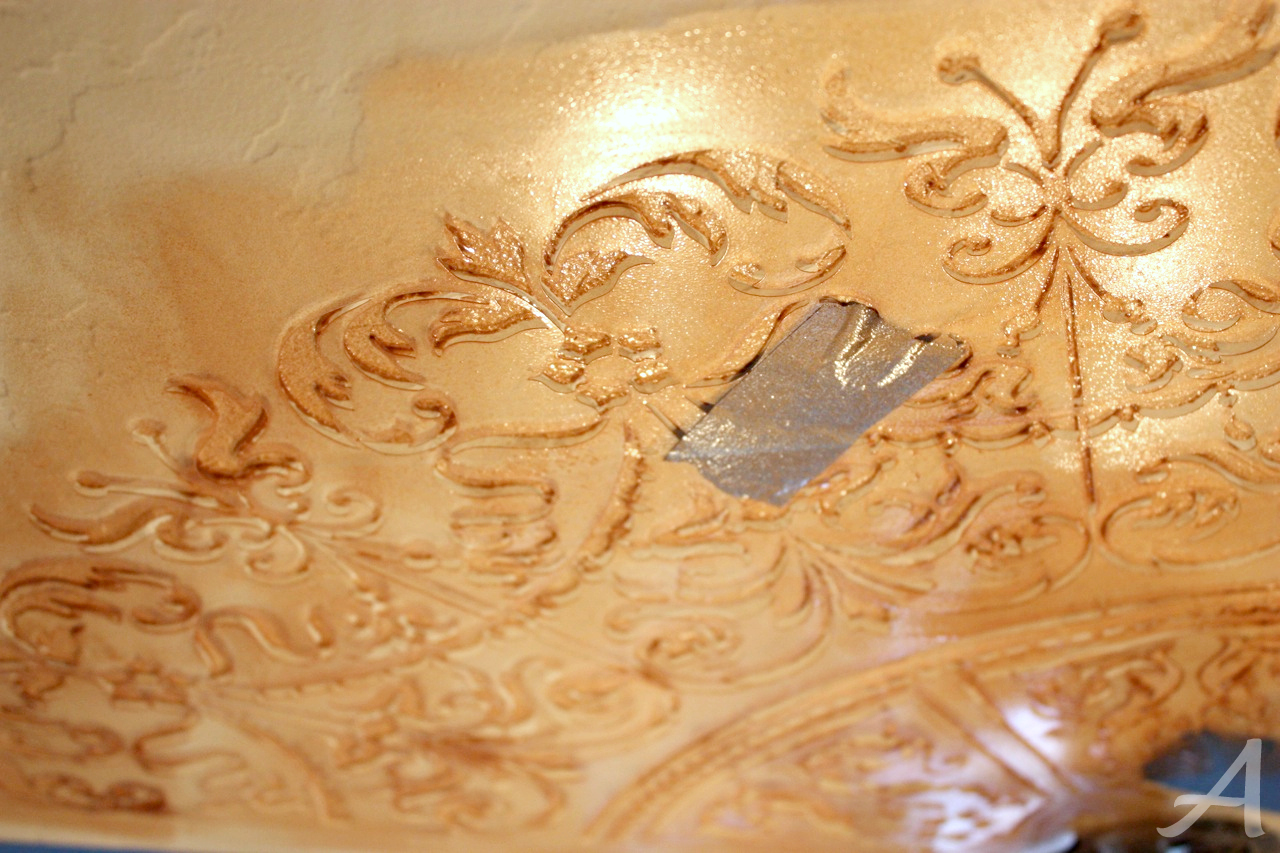 Here is what the first completed side looked like.  Loooooove it! 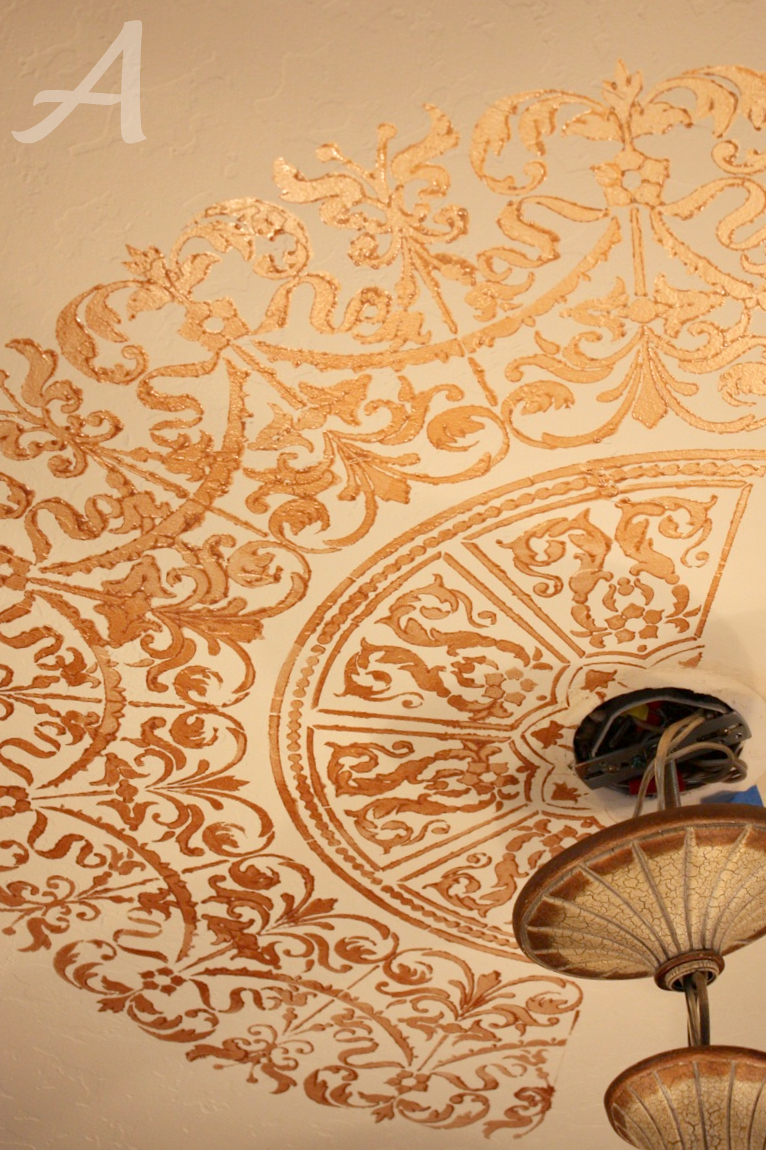 It was easier hang the stencil the second time because we knew what we were doing, and we had a line to line it up to. 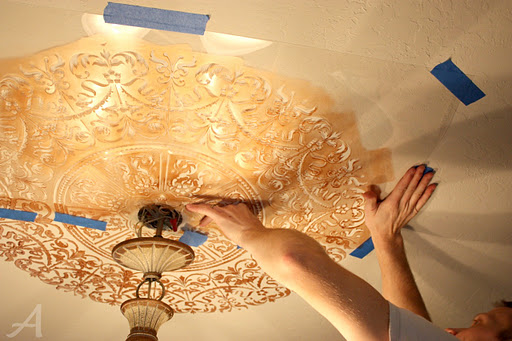 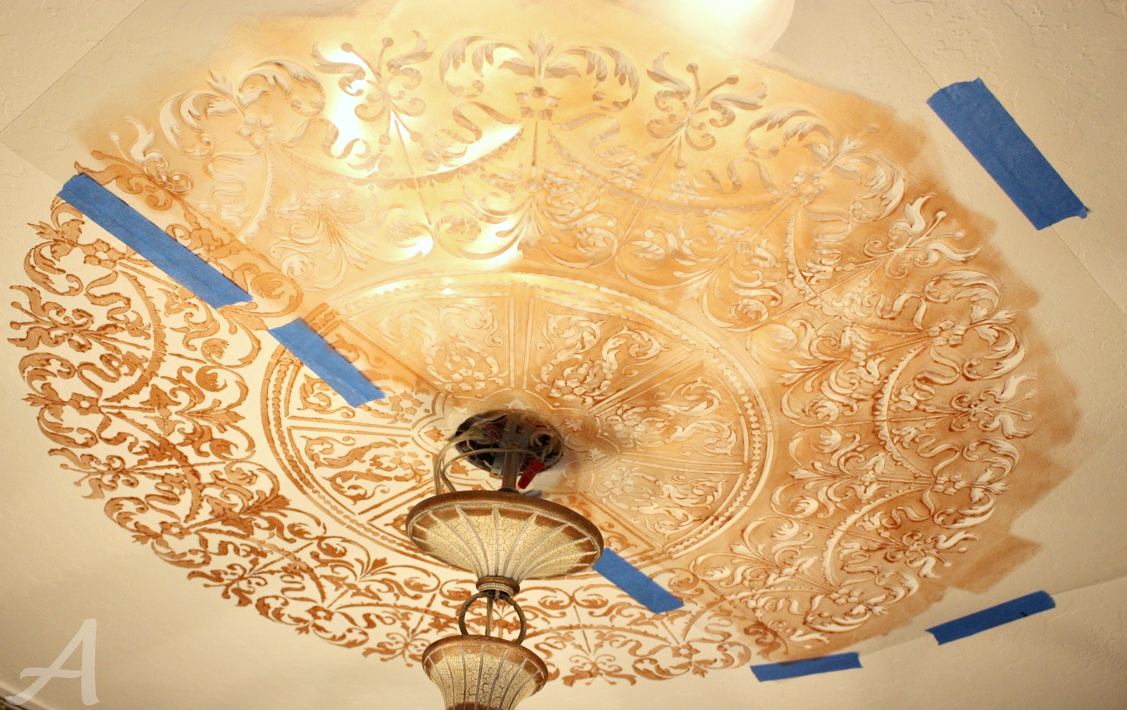 Here’s what it looked like when we were done.  Isn’t it beautiful? 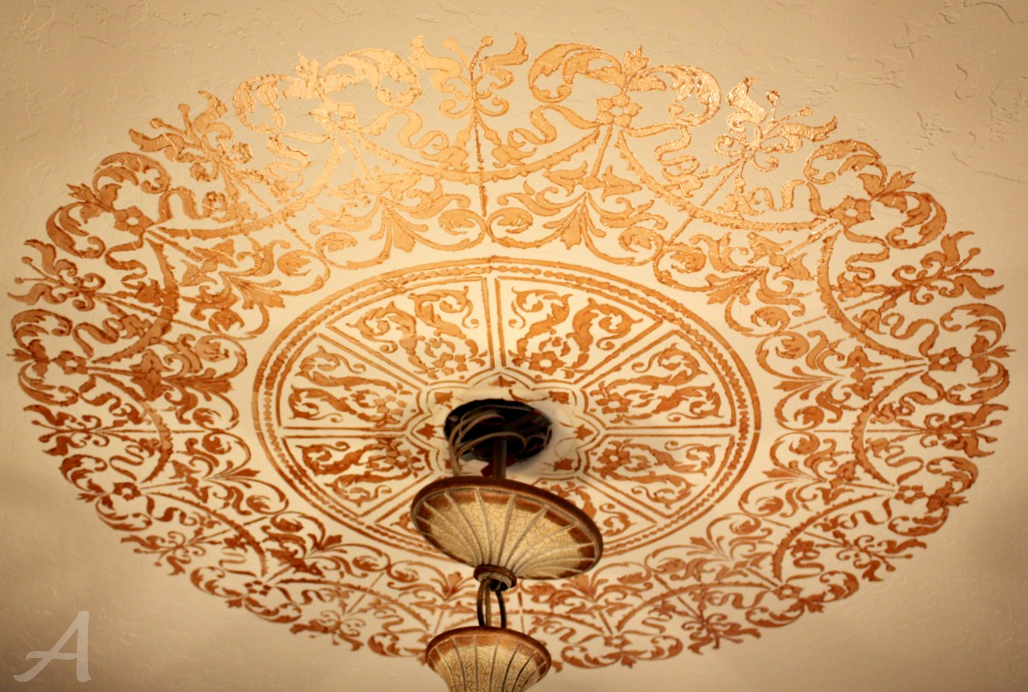 Then I got creative, yes, it happens every once in awhile. 🙂
Because the stencil turned out so beautifully in the dining room I thought I’d try painting it somewhere else too.  No one ever said it had to be used just on the ceiling!  In our bathroom I have a silver wall clock hanging but the rest of the wall looks really plain.  I thought the Georgian Ceiling Medallion would make the perfect frame for it.  I also thought the gold metallic would coordinate perfectly with all of the silver accents in our bathroom. 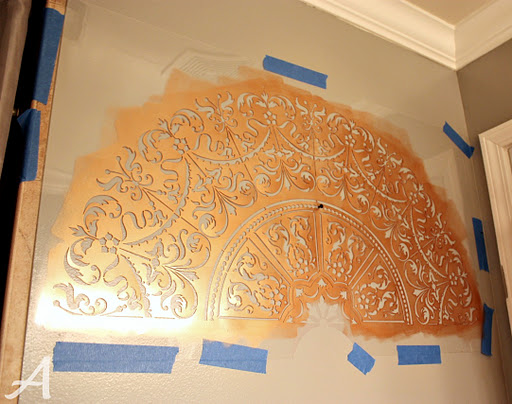 Because the clock will cover the center of the medallion I just painted the outer part of the stencil.  That’s one of the reasons I chose the Georgian Ceiling Medallion, it’s so versatile. 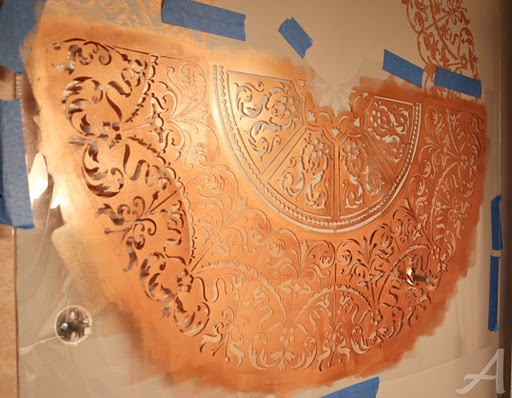 Here’s what it looked like when it was done, I loooooove it!  It turned out even better then I had imagined! 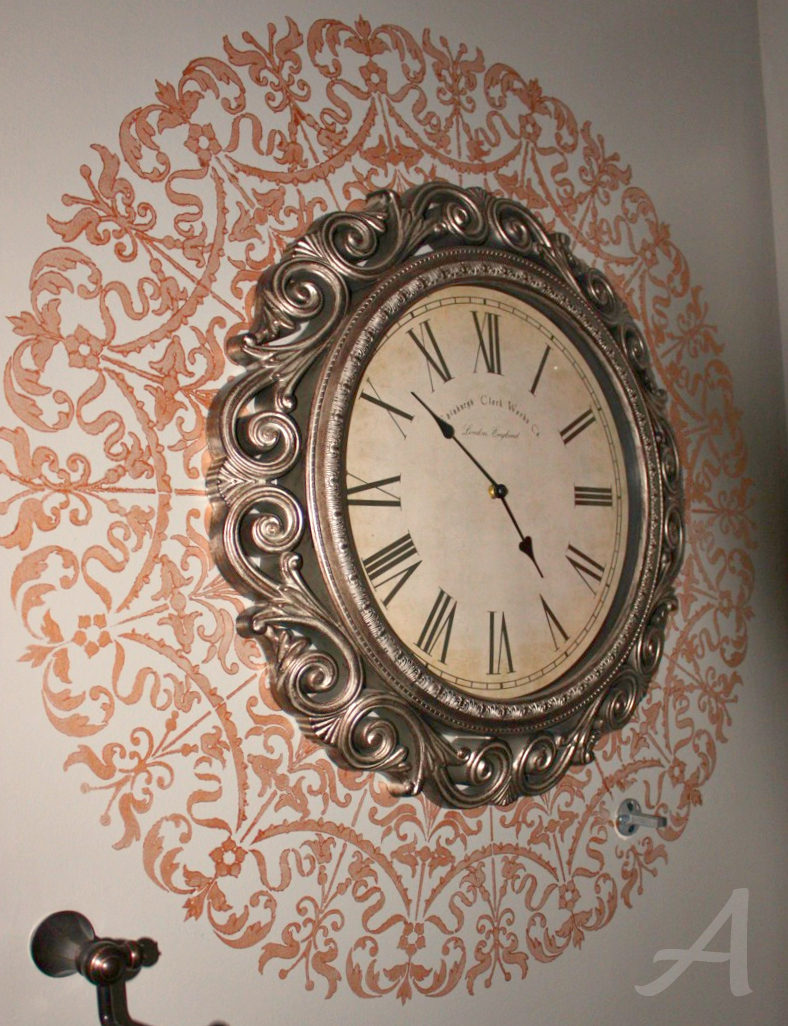 After I was finished with the stencil I wanted to clean it off and remove the paint.  I found that the easiest way to clean the paint off was to lay it in the bathtub and add a little dish soap to the water. 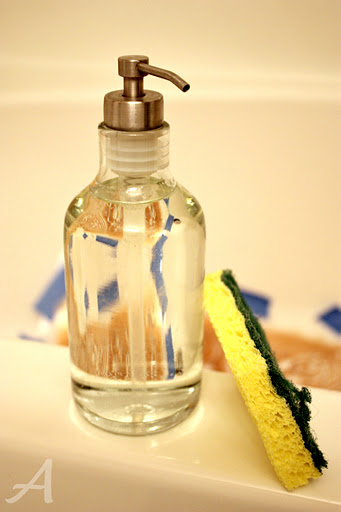 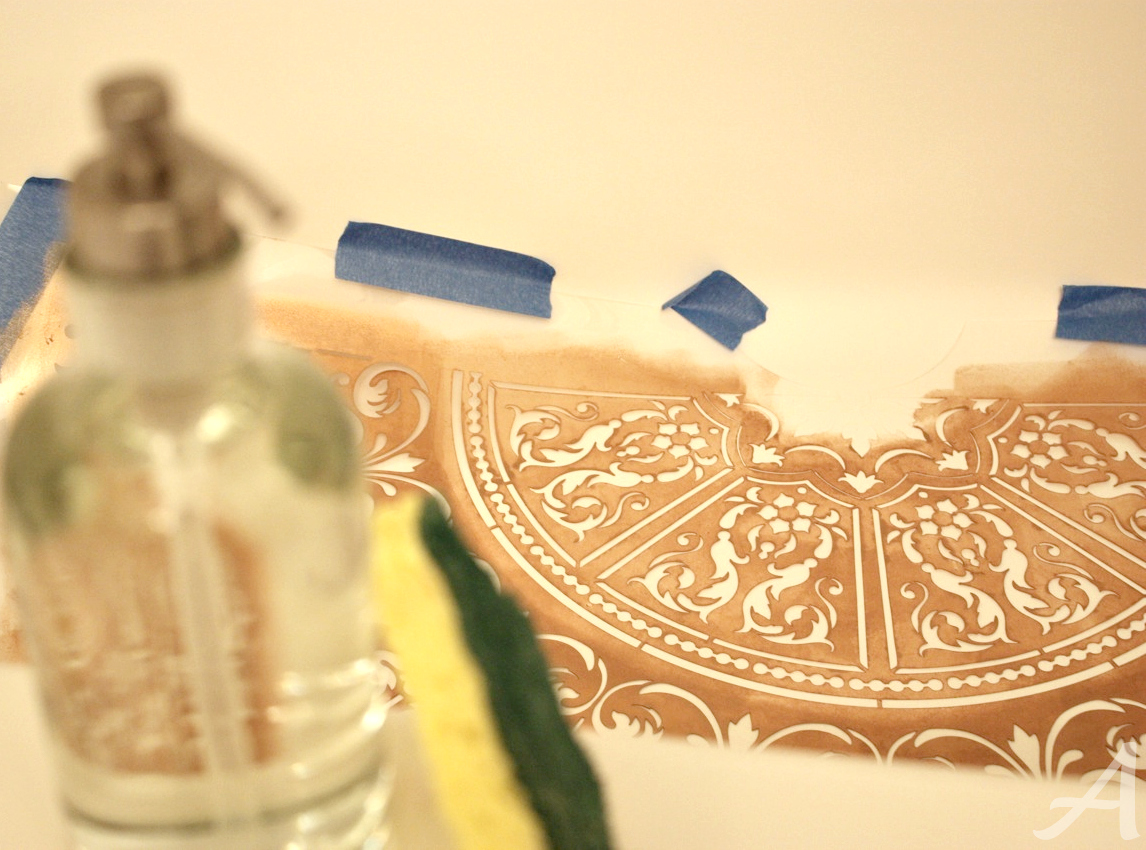 A little soapy water and the paint peeled right off!  I barely had to use the sponge, I mostly just used my fingers to peel it off.  Then I hung it over the shower rack to dry and voila, it was good as new!  I love it when things are easy to clean!I am in love.  Every time I walk in my dining room or bathroom I admire the beautiful stencil work.  The best part, it was so easy!  If I had known it was that easy, and inexpensive, to add so much beauty to my rooms I would have done it months ago! 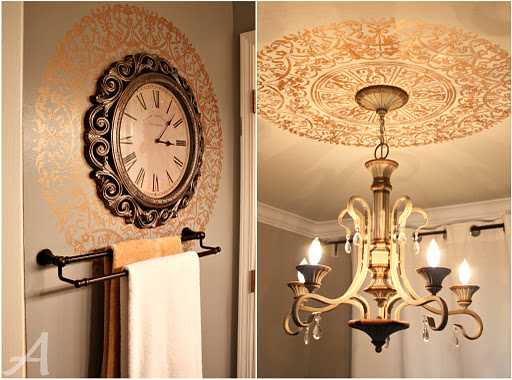 If you are painting your own stencil they have lots of “How To” videos to get you started. 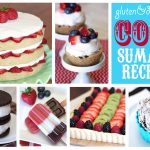 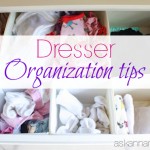